Wisconsin’s greatest painter left behind a legacy that’s both undeniable and tough to put in context.

I was struck by John Wilde’s “Exhibiting The Weapon” when I first saw the painting in the Chazen Museum of Art, so I made it my phone background for my entire freshman year at UW-Madison. I just liked the way the tiny painting looked. I didn’t know at the time that Wilde and I shared a birthplace in Milwaukee and an alma mater. As I lived with the painting in my pocket, I found myself staring into a flat depth that even after months would reveal something new to me.

A grey man with a distended head and striped sweater balances a gun impossibly between thumb and forefinger while a second person looks on. Compared to the tools for sewing, drawing and smoking on the clothed table, the two figures are giants. The human whose inch of profile frames the right side looks on. Their hand is fixed on the same line as the wrist of the exhibitor, facing the opposite direction, with a finger taping the temple where their optic nerve would be. It’s a painting where the eyes follow you. The man could be looking anywhere, so he looks everywhere.

The hand closer to the viewer, yet out of the focus in the bottom-left corner, delicately holds a faintly rendered pin. The gun should fall, but it’s frozen in paint. This collection of disorienting tricks makes space itself, not just its surface appearance, surreal.

Wilde renders absurdities with a surgeon’s attention, making his scenes coherent even when the action within them seems to defy physical laws. In his own promotional materials, Wilde declared that in his paintings, “Precisely drawn objects have been freed from the conventions of time and space.” In other words, Wilde presents in hyper-realistic detail what we specifically conceive as impossible. Even the title, “Exhibiting The Weapon,” itself references laws against brandishing firearms in a threatening manner.

Wilde is Wisconsin’s most famous painter, and he worked extensively through the late 20th century, but he remains an enigma in the annals of post-modern art. While Carolee Schneemann read scrolls from her vagina and Chris Burden made hippies watch someone shoot him, Wilde actively painted in Da Vinci’s tradition. This academic-outsider position was heightened by his residence in Evansville, Wisconsin, during the latter half of the 20th century, when New York was more central to the fine-art world than it is now. Yet his works have been exhibited in the Museum of Modern Art, and he still exerts an influence on painters who use symbolism and draw upon surrealism. Upon inspection, his paintings betray a dense conceptual framework.

Wilde’s love of Renaissance art is obvious. The nude women and architecture seem chiseled from marble, and the obscurity of his symbolism mimics a religious mystery. Wilde asserted, in an interview with Russell Panczenko, the long-serving former director of the Chazen, that it is only the techniques of the old masters he emulates, not their iconography. “For me,” Wilde said, “they were abstract paintings.” With Christianity funneled out, it’s like God died halfway through a Di Vinci painting and was replaced with Wilde himself.

This play with symbols makes Wilde’s work vulnerable to intense scrutiny—the paintings are uncanny, and one can either gloss over their complexity or dive in deep and still not make any sense of them. This is the classic surreal experience, but achieved through intense detail instead of vagueness. The order is in his method, nearly concealed in its perfection. Though there are subjects, Wilde considered them secondary to the paint, which asserts itself in its manifestations of otherwise-impossibilities. Wilde’s women and Greek colonnades are therefore byproducts of obscure internal narratives. Only Wilde could relate their stories, but he never did, instead leaving traces of the personal and the familiar.

The paintings do begin to take on the skeleton of a symbolic order when compared. Distended heads appear again and again, first in Wilde’s journals from his time drawing propaganda in World War II, the cranium straining to contain horrible memories. Guns and pencils also reappear—the tools by which worlds are rendered and destroyed themselves represented in the paint.

Two Wisconsin painters I talked with recently describe Wilde as a hero. To be a successful painter in the Midwest in the 20th century, and to leave a lasting mark, seems a great feat in itself.

Fred Stonehouse, a painter and a professor of art at UW-Madison, who considers himself “more of a surrealist,” than Wilde, describes Wilde’s influence on him as “giving permission.”

“There was a logic to it,” Stonehouse says, “especially as someone who was interested in dreamy figuration. He ran totally counter to what was popular in the art world. If you look at his work from a psychological perspective, it was very radical, and very personal. This is stuff artists have always been interested in.”

Though Stonehouse’s painting doesn’t share Wilde’s dedication to Renaissance techniques, it’s clear that, as Stonehouse says, the two artists are in the same surrealist lineage. It’s Wilde’s attitude that Stonehouse wants to emulate, an attitude in which the rule-book for what can be depicted realistically is thrown out, in favor of poetic truths.

Wilde’s influence arguably extends to unlikelier realms than contemporary Wisconsin painters. The groundbreaking conceptual artist Bruce Nauman, while studying mathematics at UW, took a drawing class from Wilde. Nauman is known for his work in video and performance art, but he kept extensive and expertly sketched notebooks of his experiments. It seems that the hyper-realism technique that Wilde would have taught Nauman seeped in, as Nauman’s lines and scales expertly document what he would build in the real world, like a schematic. Robert Storr, the author of an essay on Nauman’s drawings, “Please Pay Attention, Please,” makes the point clear: “Traditionally, drawing has been a medium for describing the world. In Bruce Nauman’s hands, it is a means of thinking it.”

In a sense, this practice of drawing a framework that will disappear once the work is revealed isn’t much different from Wilde’s drawings, which lay hidden as the starting point beneath his paint. Though Wilde, in his personal journal, disdained “94 percent” of contemporary art as “nonsense,” and that would likely have included Nauman’s irreverent approach to revolutionizing performance, Wilde’s attention to craft has much to offer even the most abstract thinkers.

My Wisconsinite friend Noah Huber, currently working on his MFA at the Tyler School of the Arts in Philadelphia, shares Stonehouse’s feelings, though Huber’s paintings also look nothing like Wilde’s.

“My first reaction to any mention of Wilde is a knee-jerk pride,” Huber says. “Most of his paintings seem like staged productions with elements flung around space. He has a sort of immersive world building element that’s so compelling to me.”

This world-building across a decades-long career is what makes Wilde’s painting memorable, and it connects his absurdities to the banalities of human life. We all have everyday experiences and dreams that, once explained to someone else, seem completely messed-up and wrong.

Wilde may have gained his sense of the absurd and the familiar as a way to create an uncanny, believable universe from the novel The Charterhouse Of Parma, by the French liberal writer Stendhal, from which Wilde painted scenes throughout his career. The connections between the 19th century French romantic thriller and Wilde’s paintings are, of course, confusing. Wilde’s familiar chiseled and classically beautiful women cavort with angels around Roman structures with angels and beach balls. There were no beach balls in 18th century Italian courts.

What connects Wilde’s approach to Stendhal’s writing is irony. Nearly every plot point in Charterhouse turns on some hilarious misperception. Fabrizio, the beloved child of an Italian aristocrat, betrays his nation to join Napoleon’s invading army. Later, Fabrizio looks down on caged birds from a jail cell, tyrant kings aspire to liberalism through despotism, and nothing that clever courtiers ever say is meant. Yet Stendhal’s novel is often praised as an important “realist” novel. These extraordinary events that shake the foundations of the small Italian kingdom of Parma are considered realistic because they’re detailed with journalistic finesse. It is this intense scrutiny of the absurd that the writer and the painter share.

Panczenko, in his interview with Wilde, pointed out a gap between the themes of Charterhouse and Wilde’s paintings, suggesting that Wilde painted what Stendhal left out. But Wilde refuted this, responding, “Stendhal tells the whole story.” This is curious, considering Stendhal’s narrative of passionate lust features no sex. Of course, it is hinted at, over and over again, and the term “make love” is employed to mean anything from sweet nothings to implications of incest. It is instead that Stendhal deliberately left the reader to imagine their own sexual encounters, far from leaving it out. Similarly, as Stonehouse pointed out to me, Wilde’s figures are rarely caught in the action of making love, and are simply nude. The erotic is merely suggested. It is the viewer who assumes the sex.

What makes a plot or a painting so unrelatable for one person a striking example of real life for another? The answer is in those scenes from which no one can turn away, like the soldier Fabrizio sees whose eye dangles out, or the two lovers staring at the oncoming inevitability of death. These are moments when even the most privileged of souls must reckon with the flaws in their own perception.

While Fabrizio wakes up after falling unconscious during his escape from jail, outside for the first time in months, he falls asleep, and, “waking… could not understand how he could be seeing trees in the room.” Wilde and Stendhal both sought to capture the feeling of arising from a dream, stuck between two realities, as flaws in perception shape the real world. This belief in the reality of absurdity is what unites a 20th century surrealist painter, a 19th century French novelist, and a 21st century Wisconsinite, who is still wondering how to deal with his own absurd reality. 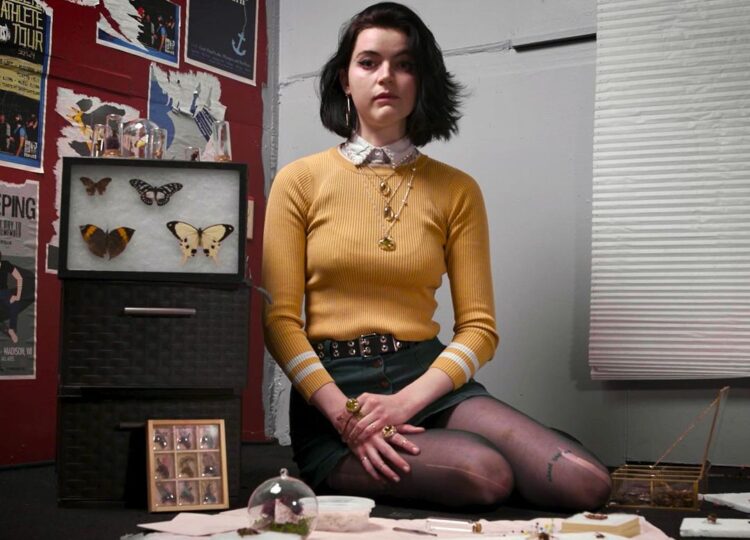 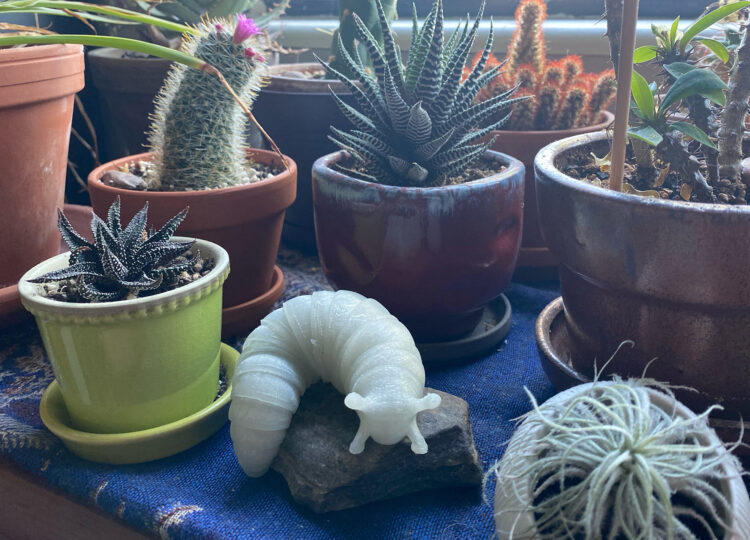 Finding a new 3-D printed pal at the local bookstore. 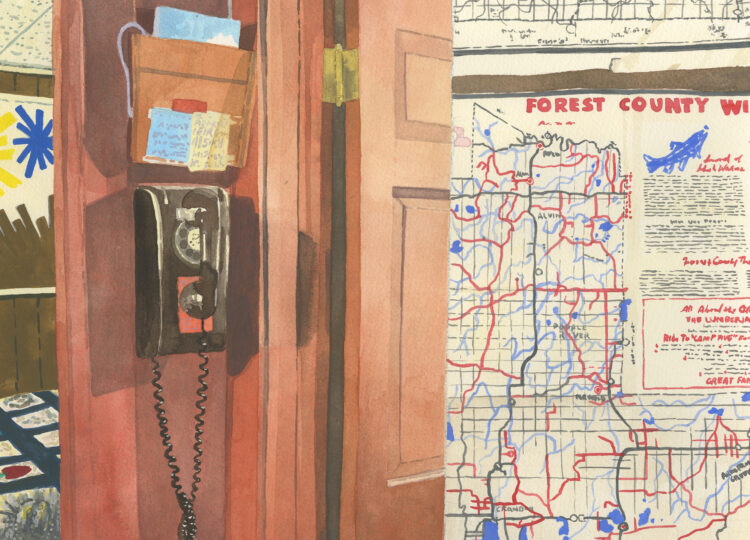 The show of charming, nostalgic paintings is up at Arts + Literature Laboratory through August 13. 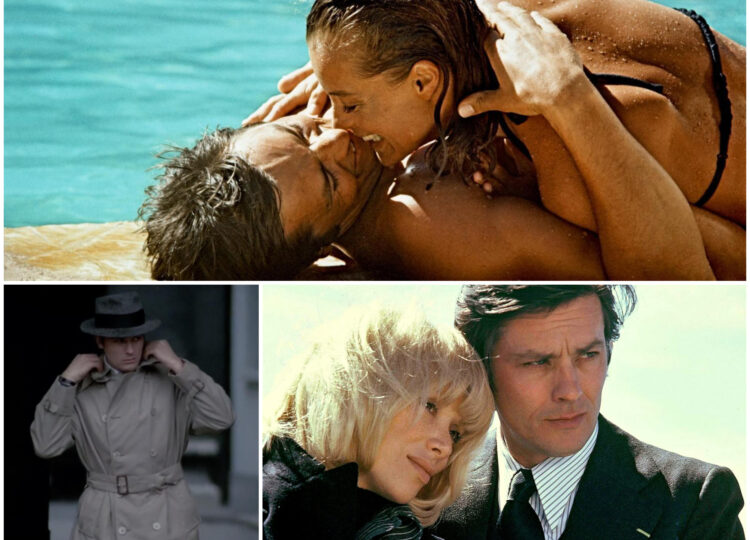 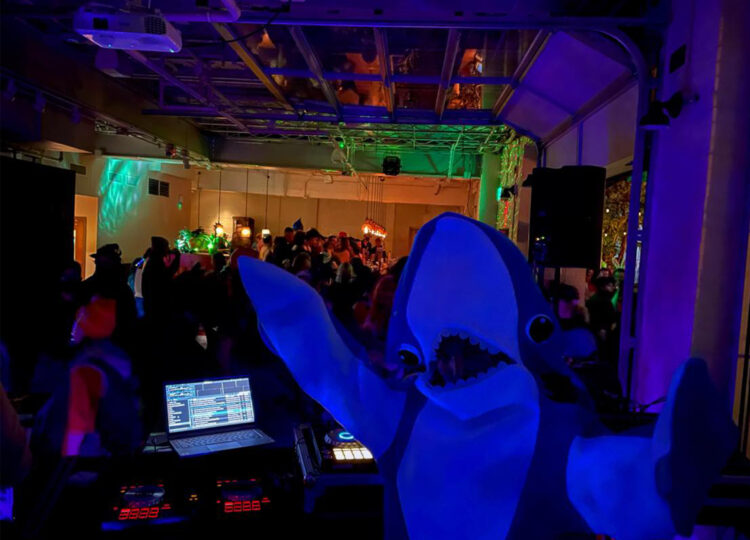 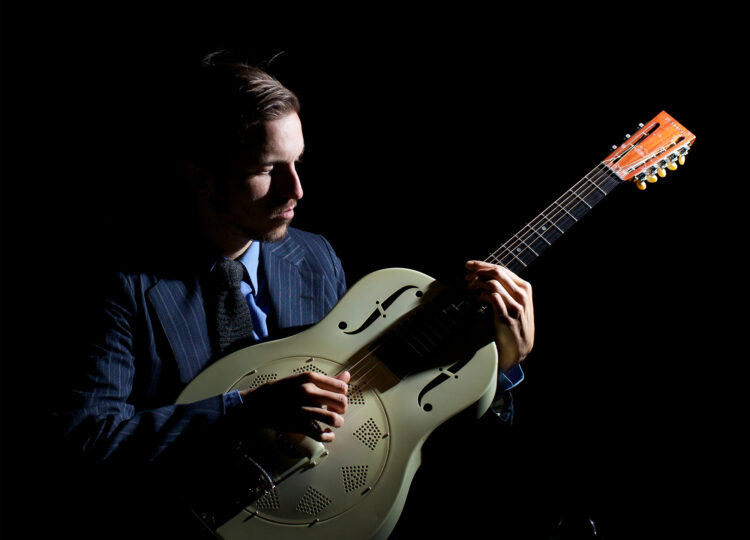 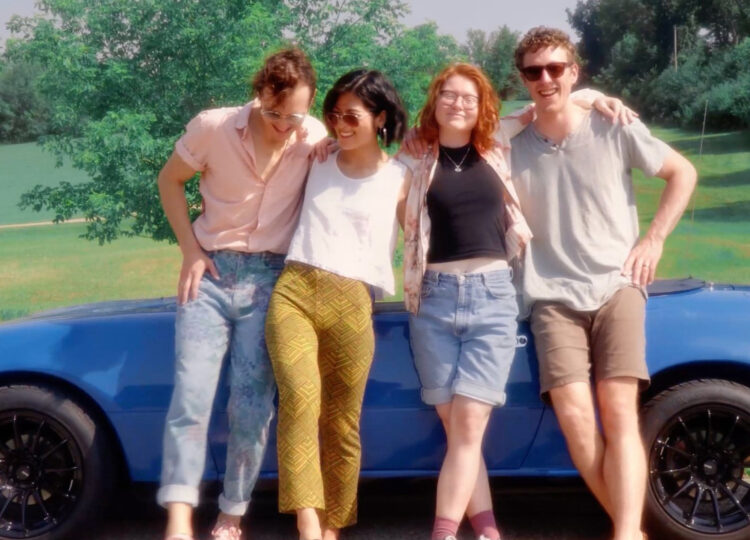 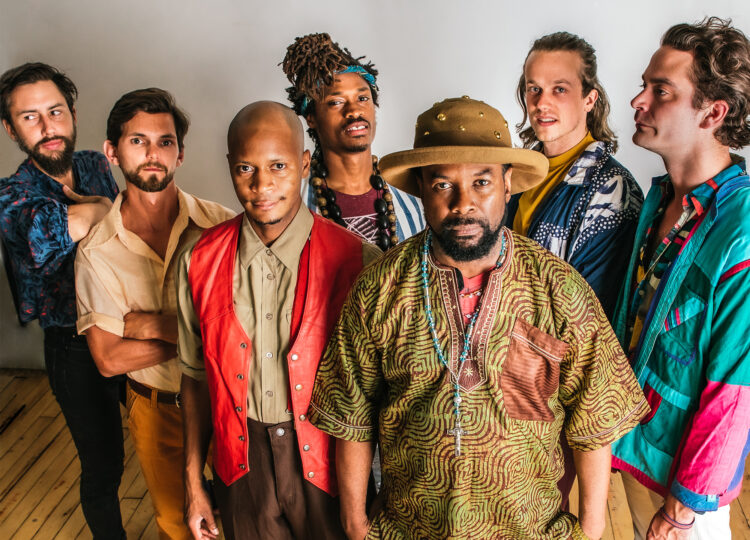 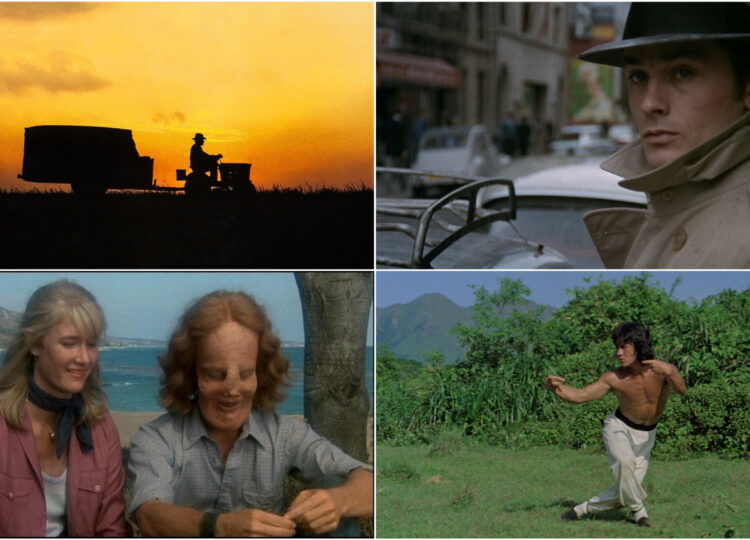 A slug of one’s own 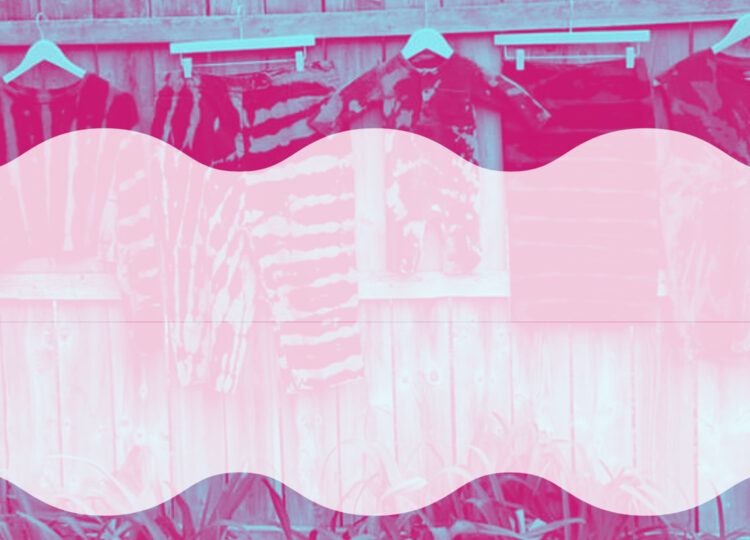 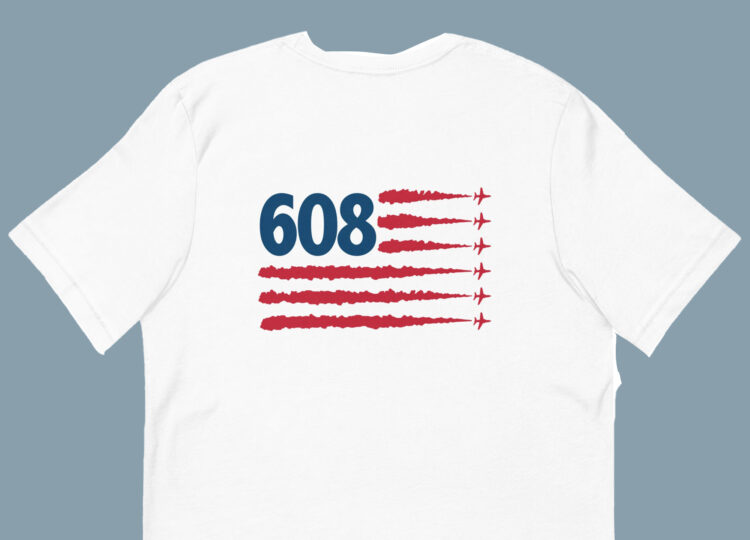 Get your Madison jets T-shirt, for some reason 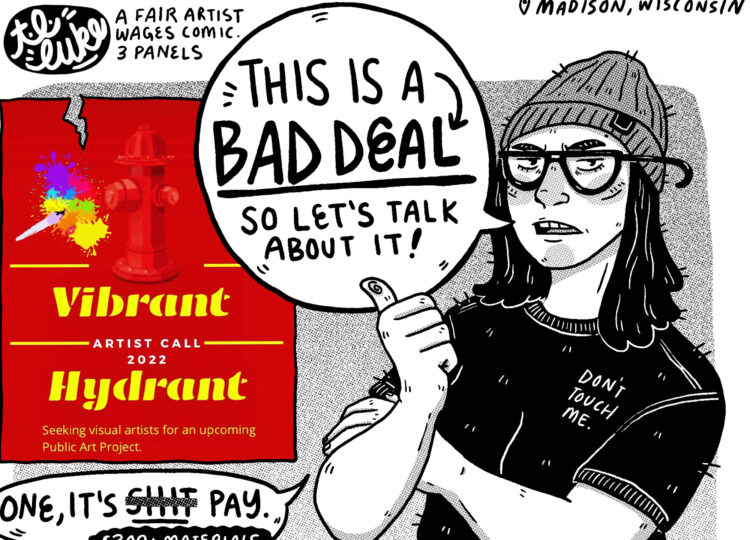 Comic: When a “public art” call is a bad deal

Will you help us raise $2,000 to shore up our budget for editorial art?

Will you help us raise $2,000 to hire more local artists?